While most data sources on CEO compensation focus on large public companies, our research brings real-world insight into the compensation of CEOs of the approximately 6 million private companies in the U.S., not just the S&P 500.

Chief Executive Research surveyed 1,631 companies in April thru June of 2018 about their fiscal 2017 and 2018 compensation levels and practices. Detailed data from this survey is analyzed and presented in our acclaimed annual CEO & Senior Executive Compensation Report for Private Companies.

We received detailed data about compensation packages for CEOs and nine other senior executive positions, as well as comprehensive information about each company’s executive compensation policies and practices. The substantial response provided meaningful data for companies across revenue ranges, industries, regions, ownership types and levels of profitability.

While most data sources on CEO compensation focus on large public companies, our research brings real-world insight into the compensation of CEOs of the approximately 6 million private companies in the U.S., not just the S&P 500.

We invite you to consult the full report for complete compensation data broken down by company demographics and performance.

The average private company CEO total compensation package for 2017 was $2,213,679, but the median was a more modest $350,622. These figures include base salary, bonus, equity appreciation, new equity/option grants, benefits and perquisites. The average total compensation figure is significantly higher than the median total compensation, as CEOs at the largest private companies have pay packages substantially greater than those of smaller companies. In addition, a small number of CEOs in our study had liquidity events (their companies were sold or revalued), which drove up equity gains in the top 10th percentile. Change in CEO Salaries and Bonuses in 2017 vs. Prior Year

The vast majority of CEOs in the study did not record any equity appreciation over the past year, nor did they receive any new in-the-money options or equity grants. Median 2018 base salaries are flat with 2017 overall, but median bonuses are expected to increase to $90,000, for a cash compensation increase of 5.9% overall.

CEO Compensation is Highly Correlated with Company Size and Success

Private company CEO compensation is very highly correlated with the size of the company, both in terms of revenue (as the next chart demonstrates) and number of employees. The larger and more complex an organization, the more substantial the compensation package provided to the CEO. The mix between base salary and at-risk compensation (bonuses and incentives) also shifts dramatically by size of company (as well as by other variables such as industry and type of ownership).

The median total compensation package for CEOs of companies with revenues of $1 billion+ is more than five times that of CEOs whose companies generate between $100 and $250 million in revenues. The median CEO running a company with between $10 and $25 million in revenues earned 52.9% of the total compensation of the median CEO leading a company with revenues of $100 to $250 million.

CEOs of private equity owned companies had the highest total compensation packages overall, with a median compensation package 87.7% higher than that of sole proprietor CEOs. While the differentials between the compensation packages at different ownership types are significant, some of this difference is also attributable to average company size by ownership type. For example, as detailed in the full report which breaks out compensation of CEOs at the various ownership types by company revenues, among companies with more than $100 million in revenues, CEOs that run sole proprietorships earn only 3.5% less than their private equity owned counterparts. A similar situation occurs with CEOs of venture capital backed companies that have revenues between $10 and $99.9 million—the median CEO of a venture capital backed company earned 90.8% of the median CEO running a PE-backed company in this size range.

As expected, there were significant differences in compensation by industry – and significant changes from the prior year.   While Wholesale/Distribution, Energy/Utility, Construction/Mining, Consumer Products Manufacturing and Real Estate had the highest median CEO total compensation the year before (in that order), in 2017 median CEO compensation packages were highest in Financial Services, Transportation, Real Estate, Construction/Mining, and Technology.  The strong stock and real estate markets contributed to increases in bonuses and equity gains in those industries.   Transportation and Tech also had very strong years in 2017 which led to higher bonuses and equity compensation in those industries as well. 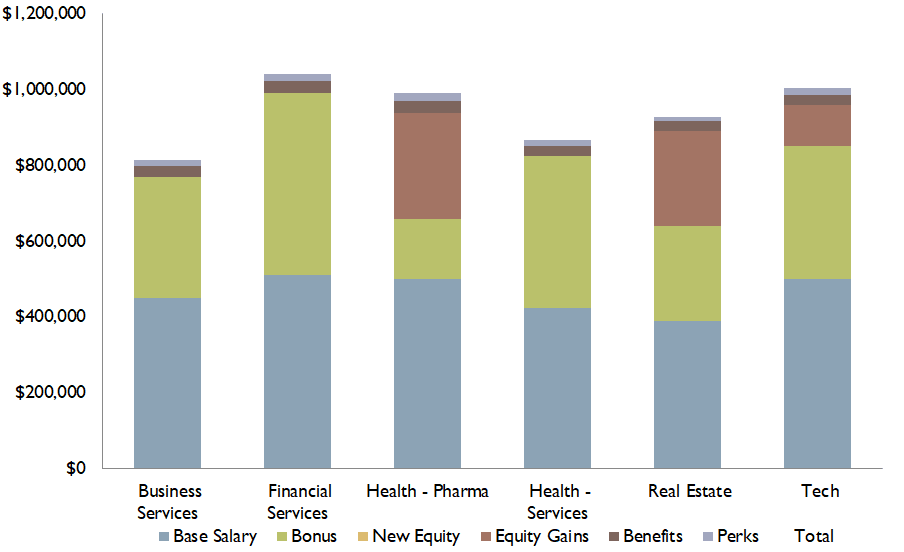 The full report provides compensation details for CEOs in 20 industries.

2017 Median Compensation of Other Senior Executives in Private Companies

Consistently with prior years, most chairmen in our survey received relatively low compensation. In fact, their median base salary was $75,000 in 2017. The majority of Chairmen in private companies don’t work full time in their companies but own substantial equity positions; therefore, many forego cash compensation and prefer to take owner’s dividends.

There were significant variations for compensation in the above titles depending on how the data was sliced: company size, industry, ownership type, growth, profitability and other factors. For example, R&D heads were among the highest paid executives in venture capital backed and select industries.  The complete breakdown of how senior executive compensation varies by these factors is available in the full report.

Compensation is a strategic tool that can be used to align a company’s most important talent with the overall business strategy. Properly crafted, an executive compensation plan can help attract top-notch talent, retain best performing executives, motivate the leadership team to succeed and align their activities to help ensure the company’s goals are being reached.

The best performing companies use incentive-based compensation to achieve their goals. However, 65.6% of companies with under $50 million in revenues do not have formal long-term incentive plans — and 40.5% of companies with over $100 million in revenue (which one would expect to be more “sophisticated) do not either. Among companies that do have a formal long-term incentive plan, only 35.5% use performance-based vesting in their plans, as opposed to 64.5% who use only time-based vesting. Further, more than half of private companies do not have their company value appraised at regular intervals, meaning senior executives have no idea what their equity-linked incentives are truly worth.

Based on our comprehensive research, most private companies spend a significant amount of money on executive compensation, but they are not spending it optimally as a strategic tool. There is great leverage in refining one’s executive compensation programs to align key executives’ incentives for outstanding vs. average performance.

More detailed information (including quartiles) on base salaries, bonuses, equity grants and gains, benefits, perks and company compensation policies and practices, as well as how these elements vary by company size, industry, ownership type, geographic region and other key variables, is available in the full report.

If you have any questions about the research or the report, feel free to contact our research director Melanie Nolan at [email protected]