Leading Automation In The Workplace of Tomorrow 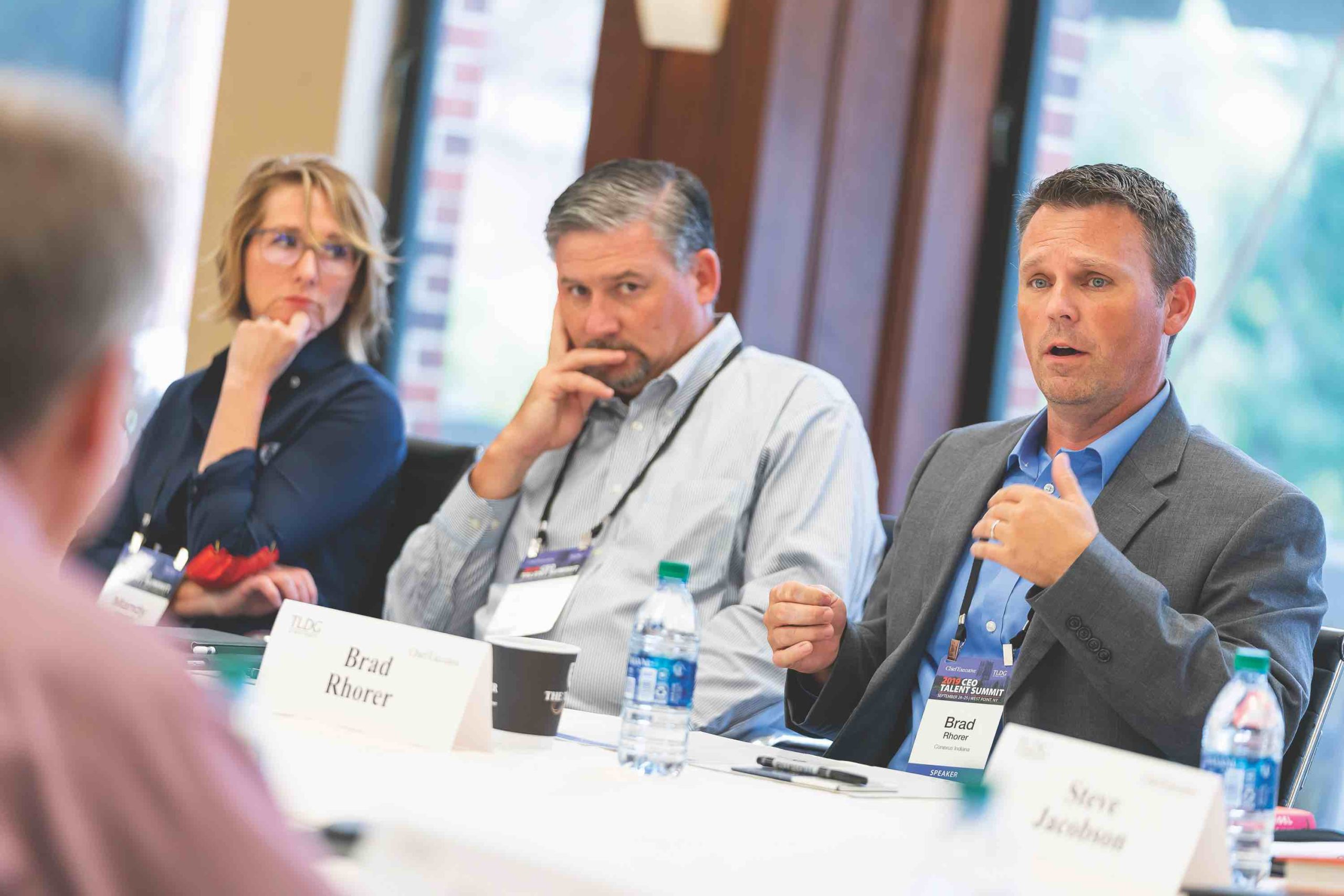 In the following roundtable recap, CEOs discuss the best ways to adapt to an increasingly automated workplace while, at the same time, calming employee fears.

When it comes to automation—whether on the factory floor or the white-collar workplace—the secret for success is, ironically, still people. As business leaders work toward harnessing the potential of robotics, A.I. and other technological advances in their companies, it’s people problems that gum up the works again and again, agreed CEOs gathered for a roundtable on adapting to an increasingly automated workplace co-sponsored by the Indiana Economic Development Corp. Resistance and a dearth of the necessary knowledge, skills and expertise within the workforce, as well as the need to cope with loss-of-job fears are among the most frequently cited issues.

“Technology—robotics, IoT, Big Data—is moving at such a rate that industry and organizations all over the U.S. struggle with a plan of attack,” said Brad Rhorer, chief talent programs officer at Conexus Indiana, a manufacturing trade group. “Where do you go first? Do you start in IT? In engineering? With your leadership team? Everybody is kind of shooting in the dark with this. How do we engage the workforce, try not to look as lost as we are and then make sure they understand this is a continuing growth opportunity for all of us?”

For business, the “why,” if not the “how,” is clear: The advantages of the ability to streamline workflow, track and optimize each step of a process and increase overall productivity while reducing costs are indisputable. For workers, however, the upside of a transformation that will change the nature of so many jobs, if not eliminate them, can be difficult to envision—and therefore hard to embrace.

“People are concerned, ‘Is the robot going to take my job?’” said Elizabeth Denlea, manager of human resources at Ausco, a manufacturer of brakes and brake-related products. “As industries become increasingly computerized and start to move toward technology like 3D printing, they’re asking, ‘Do I have the skills and the abilities to be able to use this [new technology] and higher-level equipment? Is the company going to help me learn how to do that?’”

The pace of change—with new technologies and advances coming into workplaces fast and furious—is also fueling anxiety among workers. “It used to be that humans could accept a certain iteration of technology changing because there was enough time between [changes] to adjust,” said Steve Jacobson, CEO of United Grinding North America. “Now the iterations are happening so quickly, the next version and the version after that are already invented while people are still trying to adapt to the previous one. And with A.I., changes will happen even faster—so that’s going to be a bit of a struggle with people.”

Getting employees to pick up the pace in adopting technology is already an issue for companies like public relations and marketing agency Gavin, which is working with manufacturers and companies in education and on digital communications. “We’re forcing our employees to make sure they stay ahead of the curve,” said CEO Mandy Arnold. “Things are moving so rapidly that that’s the biggest challenge we’re up against.”

Communicating both the necessity driving the transformation and what, specifically, it will mean for workers can go a long way toward easing the journey. “You do get the fear that you’re going to bring in a robot and there goes my job and out the door I go,” says Rhorer, a former senior manager of human resources at Subaru of Indiana Automotive, who recounted overcoming that barrier at a Subaru factory moving away from manual welding decades ago. “When I started we had maybe 500 to 600 welders, but by 2001 we had zero and 1,500 robots. We really had to be purposeful in the way that we transitioned that activity and be very transparent that this was actually a growth opportunity for [workers], a development opportunity to do more than just run a stick welder. They actually get to learn how robots work, and we didn’t change our headcount.”

In industries where automation is already prevalent, communicating the clear necessity of embracing technology to remain competitive can also be a game changer in fostering employee engagement. Popsicle manufacturer Ziegenfelder, for example, recognized that the processes at its three factories, which typically produce two million popsicles a day, would benefit from of revamping production process and introducing new equipment and has been rallying employees around the effort. “We’ve been very transparent, very open—talking about it a lot in our monthly, quarterly and yearly meetings,” said Barry Allen, chief customer officer of the family-owned company. “What we say is, ‘Everybody’s job is safe. We’re going to help you grow into the next role, to learn this new equipment and advance your knowledge.’ Because our goal is not to replace the people, it’s to automate our new lines. So we’re going to be adding some higher level jobs.”

In factories and other work settings, automation often translates to the elimination of repetitive, manual processes, potentially freeing human workers from dangerous and dull tasks and enabling them to use their skills in more meaningful endeavors. Jacobson likens the automation wave to the shift away from agriculture and toward manufacturing that took place at the turn of the century. “We went from 80 percent of the U.S. population involved in agriculture to 2 percent, and what happened to all those people is that there was something else,” he said. “There will be jobs available after this turning point. And those jobs being replaced are really doing things that humans shouldn’t have to do because they’re tedious, maybe even dangerous—they’re jobs, not careers.”

Automation brings the opportunity to learn new skills and move into more exciting roles. Getting skeptical employees on board with that concept, however, often requires an in-the-trenches approach.

At surface solutions provider Oerlikon Metco, CEO Michael Tobin finds it helpful to talk with employees about least appealing aspects of their jobs. “Go onto the floor and ask, ‘What’s the think you like to do the least?’” he suggests. “If they say, ‘well, it’s blowing off these parts,’ you bring in the robot and have the robot blow off the parts. You have to work with your workforce to try to bring their [mindset] to where you are.”

Tobin, a veteran of production-centric businesses like Toyota and Porsche, recommends turning the typical top-down implementation strategy on its head. “You start from the ground up, involve everyone on the factory floor from the beginning by saying, ‘This is where we are and what we’re facing, this is how we plan on fixing it. What do you think is waste?” he explains, noting that it’s key to be open with employees about financials and market competition so they understand the need for improvement. “Once the first person makes a suggestion, they all start talking and you take all the suggestions. Then you explain why some work and can be applied now, and why some don’t or need to wait until later. That way they have ownership in it, and you will see some results.”

At AUSCO, a robust training program helps employees develop new skills. “We’re very dedicated to in-house training,” said Elizabeth Denlea, manager of human resources, explaining that the company has a large matrix of in-house training available to upskill employees. “Our CEO, Ken Brown, is truly dedicated toward making sure that everybody gets a shot at the future.”

The company also draws on the experience of its long-term employees to bring new recruits up to speed on operating machinery. “We partner them with senior machinists, and they are in charge of bringing the next generation along,” she said.

Ideally, of course, next-gen workers would emerge from the nation’s education system steeped in some of the skills and knowledge companies need from today’s workforce. Not the case, said Arnold. “I’m really concerned that the generation of talent coming out of the schools is not prepared,” she said. “We’re stating to have to think about how do we actually groom this talent to be ready?”

In some states, public-private partnerships are developing to address this gap. In Indiana, for example, high-school students have the opportunity to earn industry-valued credentials while participating in paid on-the-job training through the Indiana Department of Workforce Development’s State Earn and Learn certification program.

Across the nation, many community colleges work closely with businesses to address the needs of future employers, but there’s room for improvement in the K12 education, noted Jacobson. “European-based companies have very dynamic apprenticeship programs, so students have a pathway to technical work that starts in about 8th grade,” he said.

Choice Bank’s efforts to work with educators are broader, said Samantha Bergman, senior vice president. “The kind of work we’re doing in K through 12 is not necessarily gearing them toward paths,” she said. “We’re here to help teach them the skills they need to manage change, the soft skills they need once they join the workforce, regardless of what type of workforce they get into. It’s really taking us out of the picture and asking the teachers, ‘What are the things that your students need that we can supply regardless of whether or not it helps us?’ In the long run, that will help our workforce [broadly].”

Automation Is At A Tipping Point